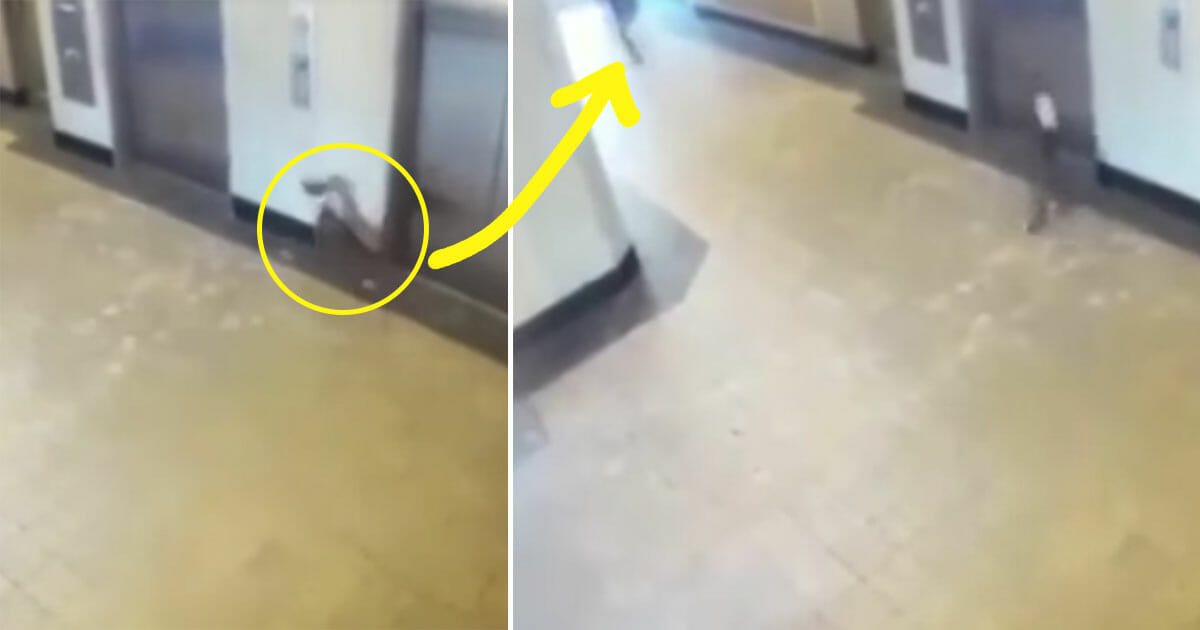 A hero can reveal itself in many different forms. For this dog owner, it would be in the shape of an unknown person.

The owners’ dog was trapped on the wrong side of a moving elevator, caught in his leach and seconds from getting strangled to death.

Just like small children, a minute of not looking at their direction can be fatal. Just by remembering when my son was very young, I recall that he could do the most unexpected things in the blink of an eye, for example getting close to an open window or to the stove.

However, this applies to animals as well, which was something this dog owner would find out.

Caught on the wrong side

The footage shows the dog owner walking with his dog towards an elevator.

However, when he enters, the distracted owner doesn’t see that the elevator doors  close on the leash behind him, leaving his dog on the wrong side of the closing doors.

At the moment the elevator doors stats to rise, it is already to late for the dog owner to do anything to save his dog. However, just around the corner, an angel appeared.

The elevator starts to rise and the dog’s leash tightens around its neck. Just seconds later, the small animal is thrown up against the wall and back onto the floor.

“I would hate to know what would have happened if I wasn’t able to break that leash before she got to the top again”, the dog owner told WGNTV.

At the same moment the dog gets thrown up against the wall, and just seconds from leaving earth in a tragic death, a supervisor named Brian Usserys of the building appears around the corner.

Brian realizes he only has seconds to react to what’s happening to the dog – and starts running.

Luckily, Brian managed to break the pets leach and saving the dogs life.

According to WGNTV, the dog miraculously din’t suffer any injuries. The owner, in chock after what happened not knowing anything from inside the elevator, could finally see his pet again. All thanks to a guardian angel around the corner who acted fast – and saved the dogs life.

“The guy was freaking out. He didn’t know what he was going to come back to,” Ussery told WGNTV.

Brian is a real hero saving the dogs life. Share to honor his wonderful act!