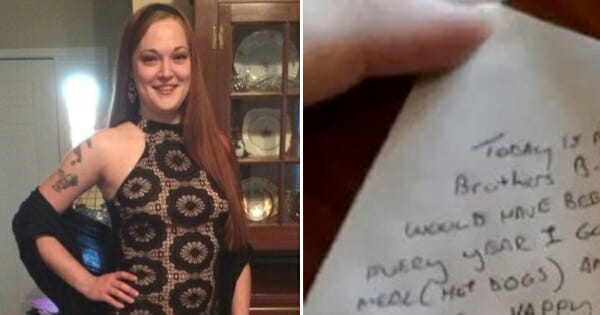 Working as a waitress and making sure your customers always get the service they feel they deserve can be tough.

Often, a good tip can show you that your customers appreciate you.

Claire Hudson, a waitress at Mac’s Grub Shak in Spring Hill, Tennessee, got just such a tip — and it completely transformed her day.

One recent afternoon, a young couple came in and sat down at a table in her section.

The couple ordered two hot dogs, a hamburger and beer. They ate their food and went on their way. Nothing out of the ordinary, right?

But as Claire was cleaning their table, she noticed something strange. In addition to the $29.40 they left for their meal, the couple added a $36 tip.

SPRING HILL — The tip heard ’round the world:Claire Hudson noticed nothing out of the ordinary when a middle-aged man…

Posted by Citizens of Lawrenceburg – Tennessee on Sunday, 15 March 2015

It was weird that the tip they left was bigger than the cost of their meal. But then Claire looked closer and realized that the tip symbolized something much bigger. Claire turned over the bill and saw a emotional message that described why they had left the tip.

Here’s what the note said:

“Today is my brother’s b-day. He would have been 36 today. Every year I go eat his favorite meal (hot dogs) and tip the waitress his age. Happy B-Day Wes.”

Claire rushed into her manager’s office and had him read the note. As he read the words, the tears started to flow. What Claire didn’t at first was that her boss, Michael McCray, had also lost a brother and understood what the note writer had gone through.

“In just a few weeks he would have been 28. It’s odd that this man would choose my restaurant over any other place,” Michael told the Daily Mail.

When Claire went home that night, she decided to share the story online. Soon thousands of people had liked and shared her post, and virtually all of them were touched by the fine tribute the man made to his deceased brother.

Do you also want more people to know about this brother’s tribute to his deceased sibling. Share it with your friends so they can also find out about this wonderful event.