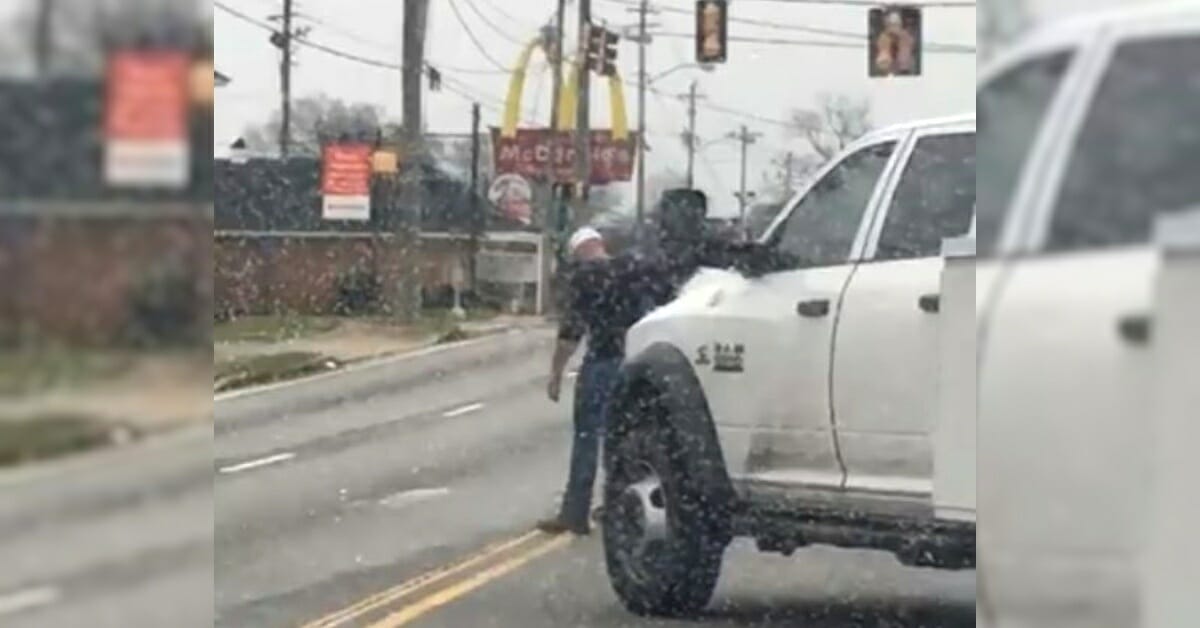 When it comes to traffic jams, we’ve all been there.

In particularly bad ones you go through several phases, ranging from confusion, to annoyance, to anger, to disbelief. More often than not you eventually find the source of said jam, which can be anything from a serious accident to plan old road congestion.

Motorists on a busy highway in Griffin, Georgia, however, were left stumped when traffic came to a complete standstill. It was raining, but there were no signs of an accident.

E’Ondria Weems was one such motorist that day, and she recalls seeing Justin Jackson standing in the middle of the road, his truck parked across both lanes …

When E’Ondria saw Justin abandon his white pickup and run into the busy four-lane road in the rain, she was perplexed. It took her a few moments to realize what was happening.

An elderly man was trying to cross the road, though doing so extremely slowly. His walker prevented him from going fast, and the situation had the potential to become dire.

Cars were flying past the man, not one person thinking to slow down and let him pass. Justin spotted the danger, even if no one else did, and told 11Alive he took it upon himself to do something about it.

“The old man was walking across the streets and people were flying by and I was like I got to stop,” he said.

E’Ondria, meanwhile, wanted to capture Justin’s heroic actions, and so retrieved her phone and filmed what took place. She wasn’t alone in being touched by what she witnessed. In fact, the subsequent video she uploaded to Facebook has been viewed millions of times, with people all over the world praising Justin’s quick thinking.

“It makes me feel good because it’s obviously making other people want to do good, too. And that’s the ultimate goal – make everyone do good,” Justin said.

What a guy Justin is, and what a great example he’s set for people.

You can see the man in action in the video below:

Two huge thumbs up to Justin, and a big thank-you to E’Ondria for recognizing that his gesture needed to be thrust into the spotlight!

If you think Justin did the right thing, and you believe more people should think like him in these types of situations, hit the SHARE button.