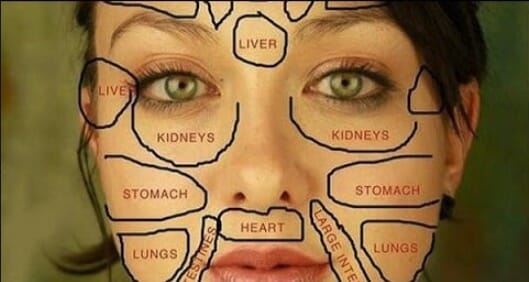 Most people take a look in the mirror every day – and it’s a good thing they do.

Do you suffer from pimples, redness, wrinkles or dark bags under your eyes?

While these are often normal, what many people don’t know is: These and many other changes in your face can point to disease.

Take another look at your face to see how healthy you are!

Is your brow tense, pale or red? Then your metabolism may not be working properly.

When the skin on the forehead is oily, it could be a sign of impaired liver function. In some cases, it is also associated with excessive perspiration.

One disease that has a tell-tale sign is jaundice, which can leave your skin looking yellow. This is because of excessive amounts of the yellow chemical bilirubin in the body and blood and is a sign of serious liver problems.

Shockingly, your hair can reveal a lot about your health – researchers can even determine how stressed you are just from examining your hair.

Hair grows about a centimeter every month and incredibly, each centimeter reveals your stress levels from the month before.

Do you lose a lot of hair and have a swollen face, fingers or hands? It could be because your kidneys can’t get rid of excess fluid, which then accumulates in your body.

If your eyelids feel heavy and start to droop, it may be because of poor spleen health.

According to Eia Friman, a Chinese medical practitioner and facial diagnostic therapist, drooping eyelids can be point to a weak spleen that needs to be strengthened. “The spleen’s job is to keep everything in place, which we can help it do by strengthening it. With facial acupuncture we can treat it locally and stimulate fluid metabolism and blood circulation”.

Dark circles and bags under our eyes can be a constant battle and leave us looking tired and run-down. One cause of dark circles under the eyes could be vitamin deficiency and disease – including low iron levels.

If there’s a greyish tinge to your face that’s accompanied by large pores, it could mean you have damaged lungs.

Smokers often suffer from this, as smoking constricts the blood vessels and makes it harder for blood to flow through skin cells, leaving skin grey and shiny.

6. Rash on the cheeks

A viral illness that’s most common in children, fifth disease can also affect adults. It causes a bright red rash on the cheeks that can spread to the arms and legs – and strangely looks like lace.

Swelling in the nostrils can point to a malfunctioning thyroid. Since all the body’s cells rely on the hormones regulated by the thyroid, symptoms can show up anywhere in the body, from the skin, muscles and organs, to the ears, nose and throat.

Excessive redness and swelling in the nostrils and eyelids can also point to sinusitis. This is especially serious for children as it can spread to the brain membranes, writes online doctor’s network, Kry.

A red nose can often be mistaken for acne, but the redness and swelling caused by rosacea should be treated differently.

Rosacea begins in adulthood (usually after 30) and mostly affects people with sensitive and fair skin.

It’s caused by sensitive gastrointestinal mucosa and common treatments include tablets, as well as making simple lifestyle changes, like staying out of the sun.

9. Skin above the lip

Stress can lead to skin problems and wrinkles under the nose, as it affects our hormonal balance.

The level of estrogen in our body changes when we’re stressed, which in turn affects how our sexual organs function. This hormonal imbalance is most often shown in our skin.

Do you have a tingling, throbbing feeling in your lips or in the skin around your mouth?

Blue lips, or a bluish tinge on the skin, can also indicate something is wrong. The blue color is caused by a lack of oxygen in the blood and is a symptom of a lot of diseases, including pulmonary and heart disease and congenital heart defects.

Mouth and chin rashes are mainly caused by stress, and as mentioned before, can sometimes be down to changes in hormone levels.

Rosacea is an inflammation of the blood vessels in the face that can cause severe redness on the chin, cheeks and forehead.

A protruding chin in men can also indicate an enlarged prostate.

As you can see, facial changes can reveal a lot about the state of your health.

It’s worth taking a closer look at your face before you put your make up on or leave the house. Share this article with your friends to help them understand what facial changes can really mean!